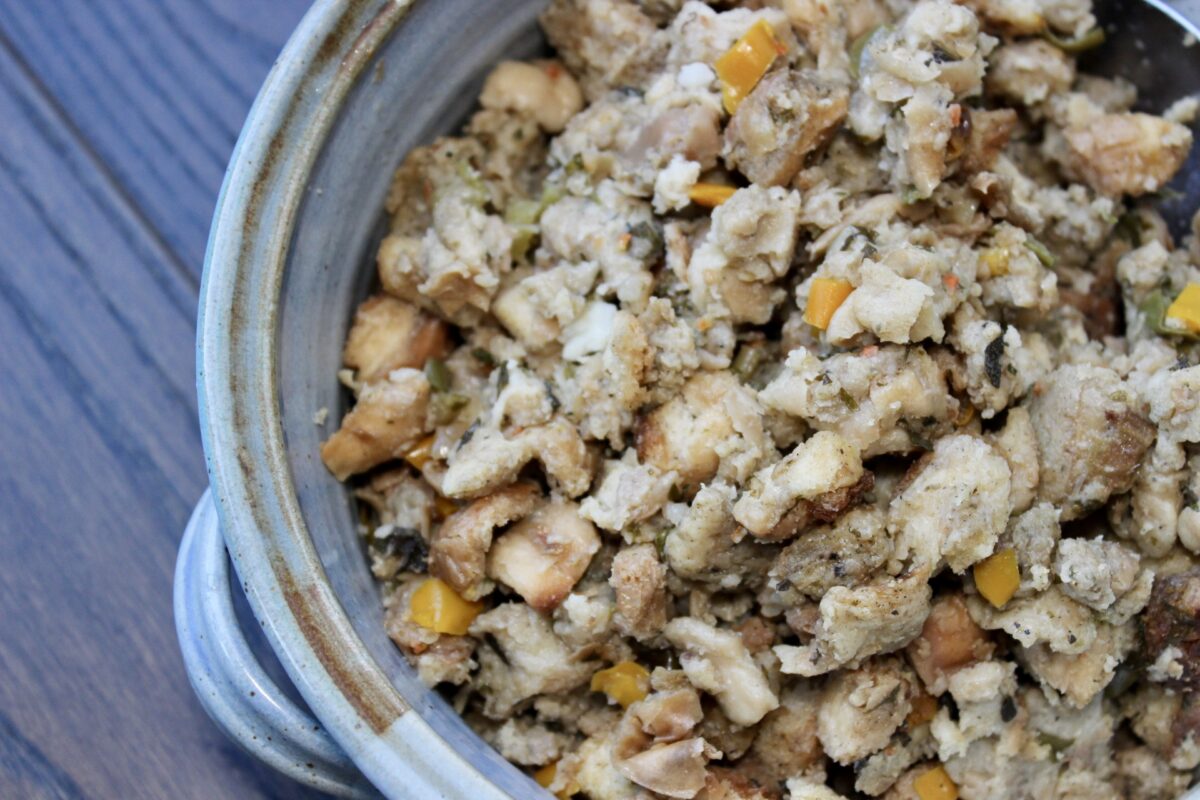 Is it stuffing? Or dressing? As kids we were told if it’s Sunday or a holiday it’s dressing, otherwise any other day it’s just stuffing. That was my parents’ rule. No matter what day you make this, Stuffing or Dressing is always a favourite with a turkey or chicken dinner.

I never make Stuffing exactly the same way. I mean, I follow a basic method but with stuffing you don’t need to measure exact amounts of the ingredients. And the type of bread I use is whatever is going stale or is in the freezer.

What kind of bread do you use in stuffing?

I make Celery Bread often and since I have to trim the loaf to make a rectangle, I always have leftover bread that I’ve cubed and frozen for making stuffing another day. Or if I have stale bread I’ll seal it in a freezer bag and save it. You don’t have to be too picky about what type of bread but I find plain white, whole wheat or sour dough are the best. Grainy types aren’t my favourite in stuffing. Sometimes I toast the cubes before freezing, sometimes I don’t. It doesn’t matter. Stuffing is just as good made with fresh bread. I’m just thrifty and I hate wasting good food. My friend Leesa makes stuffing with leftover hamburger buns which are sweeter than most bread. I think that’s awesome!

I’ve changed the way I make this over the years and finally I think I have it just the way I like it. Sometimes it just tastes better than other times and I have no idea why. I prefer the traditional type with bread and herbs and not much else. Cooking the stuffing in the bird is my preference, otherwise it isn’t stuffing is it? I’ve tried making extra in a crock pot or baked in the oven, but it doesn’t always work out. 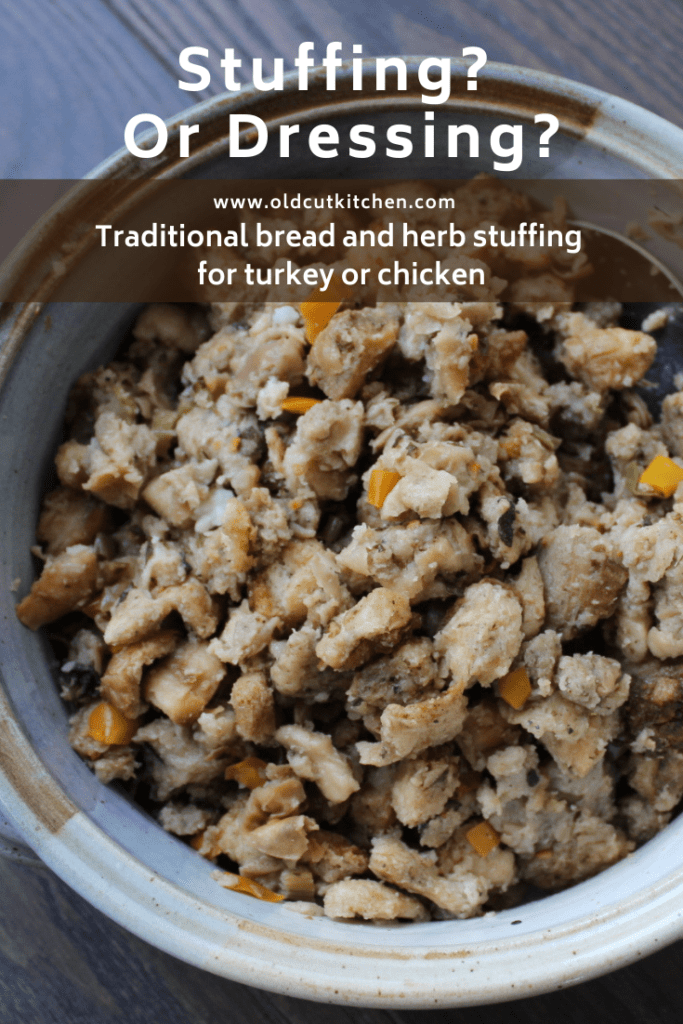 You can toast the bread cubes a day ahead. Probably even two. Even if you’ve pre toasted the cubes before freezing, giving them some time in the oven to dry out and brown a bit helps ensure your stuffing isn’t too soggy. Just spread the bread cubes on a baking sheet and toast in a 325 degree oven for maybe 15-20 minutes. If you’re making a lot you might need to give the cubes a stir a few times during toasting. 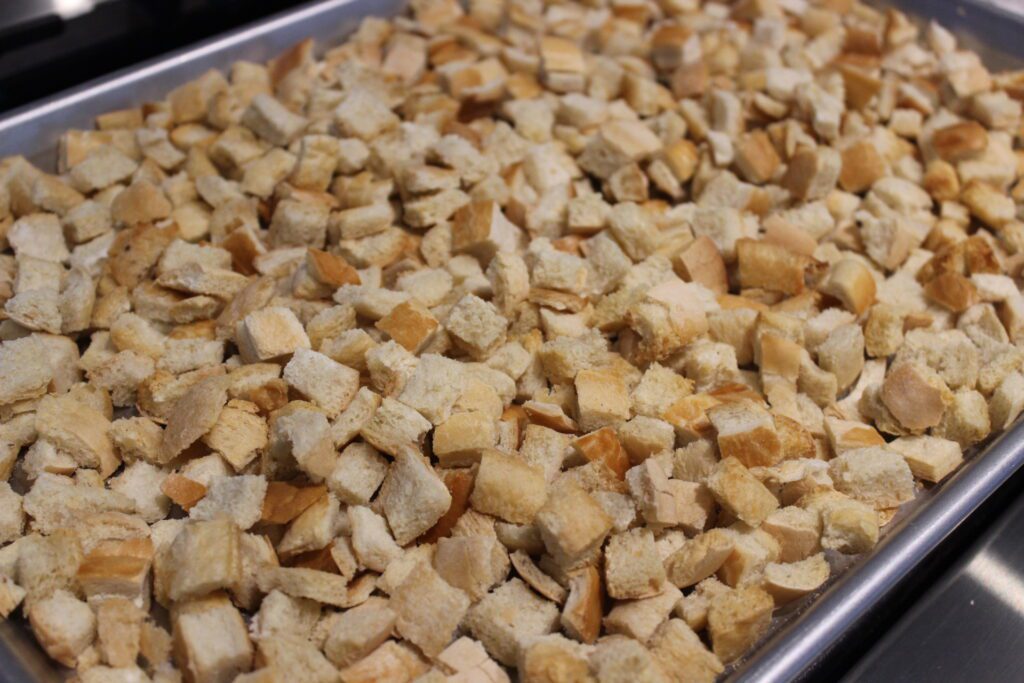 How much stuffing fits in a turkey?

If you have a 10 pound turkey you probably can’t get more than 6 cups of stuffing in it. Give or take. For a 12-13 pound turkey use up to 8 cups of bread cubes.

Start by chopping some onion, celery and sweet pepper and sauté in butter. It doesn’t matter what colour of peppers you choose. I like to use red and green at Christmas. It’s a lot of butter but it’s a great way to add moisture and flavour to the bread cubes. Once they’re softening and the onion is slightly golden add salt and pepper, table cream or milk, dried chicken stock and liquid chicken stock. Let simmer for a few minutes then add dried thyme and sage. Stir and pour over the dried bread cubes. Chop fresh parsley, sage and thyme and add to the stuffing mixture. I like the combination of dried and fresh herbs.

You want the mixture to be moist but not mushy. It’s important to cool the stuffing before you put it in the bird so refrigerate the mixture until your oven is pre heating and stuff right before cooking. 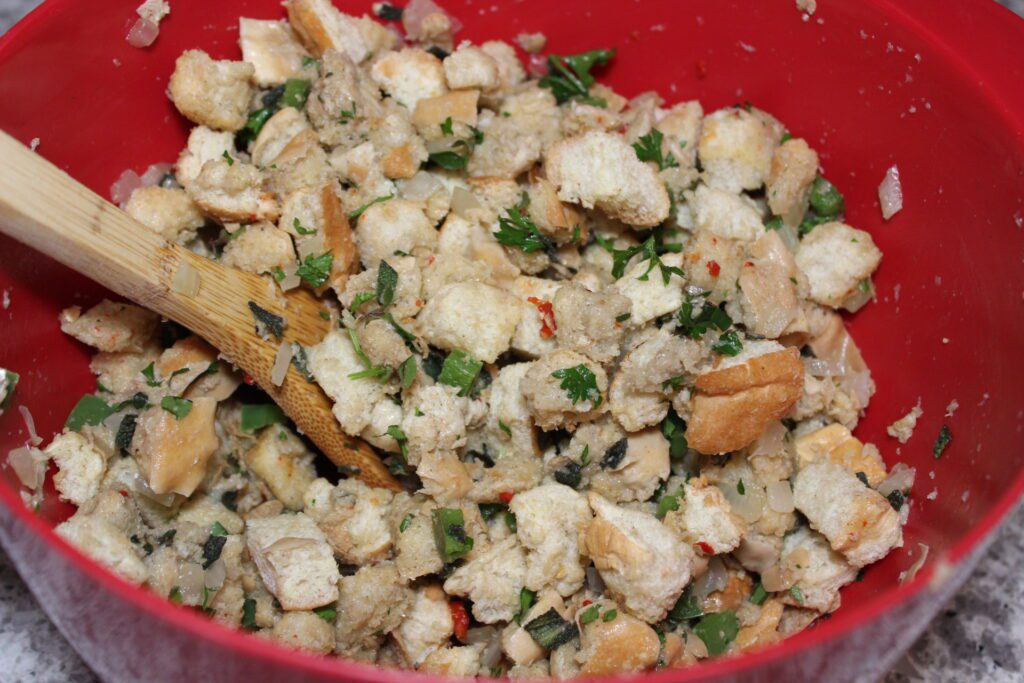 You can pack lots in your chicken or turkey, just not too tightly. Somewhere between loosely packed and jam it all in. I once put way too much stuffing in a turkey, literally forced it in, then added more. The result? Mostly uncooked stuffing.

Where do you put the stuffing?

Pro tip: there’s more than one place to stuff a turkey or chicken. Besides the obvious body cavity, you can also get some stuffing in the other end if the neck has been cut out. It’s a bit of an art because you then need to turn the bird over to stuff the other end and sometimes the stuffing falls out. Frustrating and counter productive. But, did you know you can pull back the skin inside the legs and get some in there too? 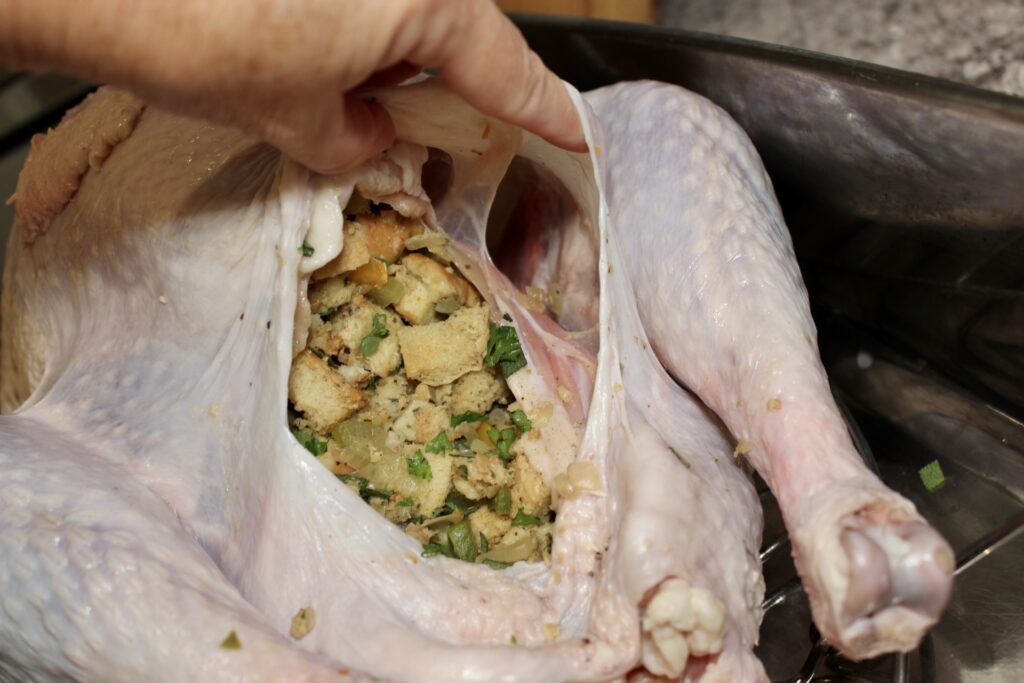 Try to get the legs as close together as you can and skin pulled down over the opening. If you have some extra skin from the neck area, you can cut it off and place it over top which helps keep everything inside moist.

If your chicken or turkey came with the handy pocket to hold the legs, push them back through to seal everything in. 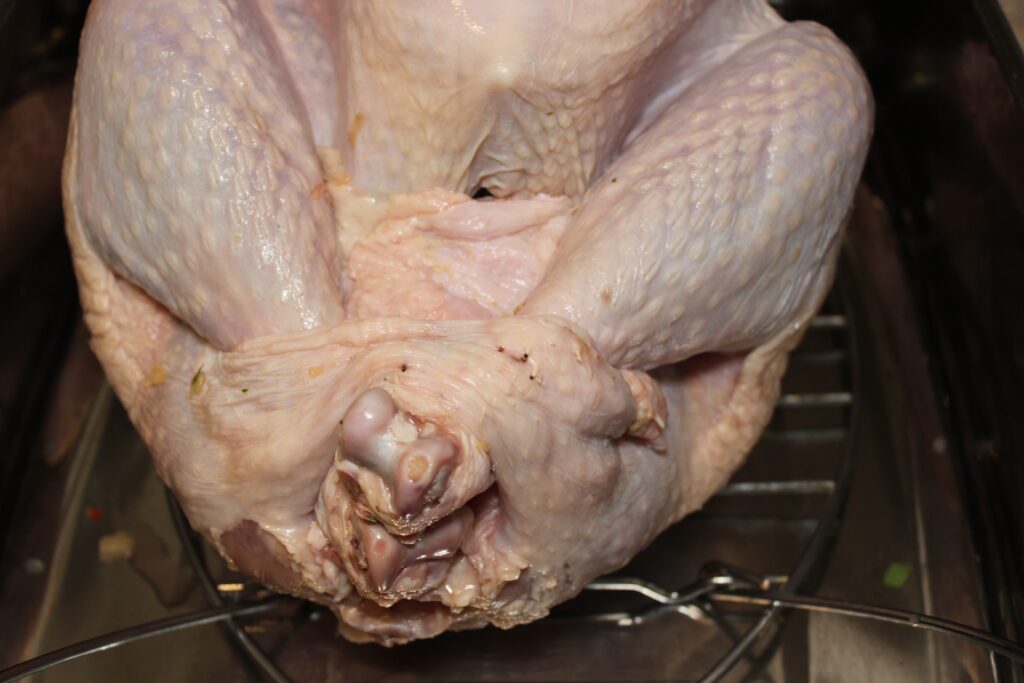 Remove the stuffing soon after taking the turkey out of the oven and cover to keep warm until serving. 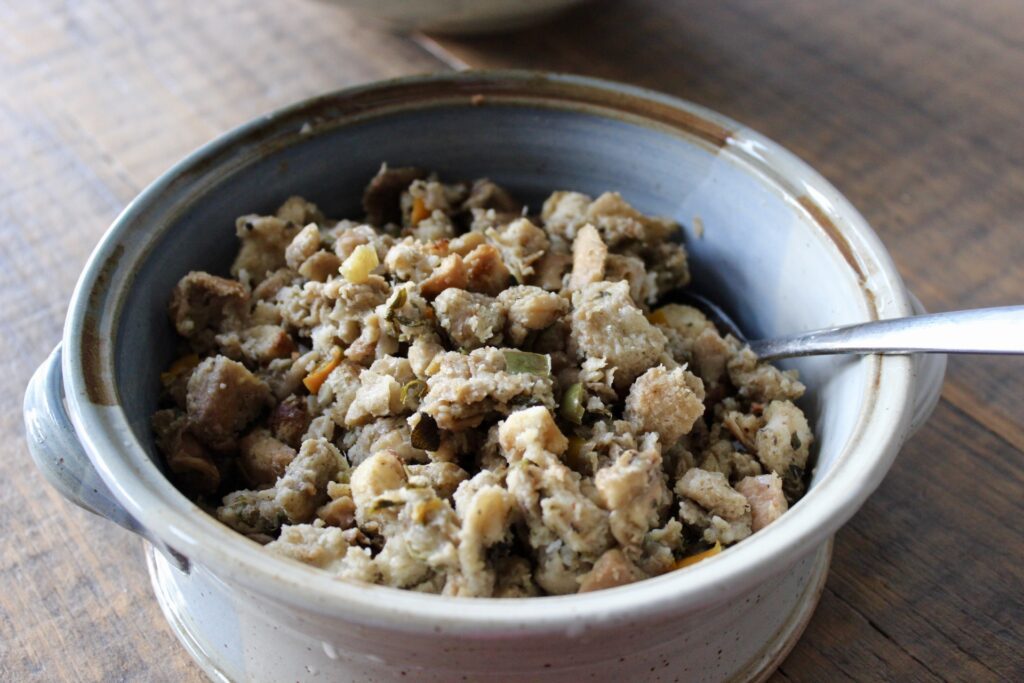 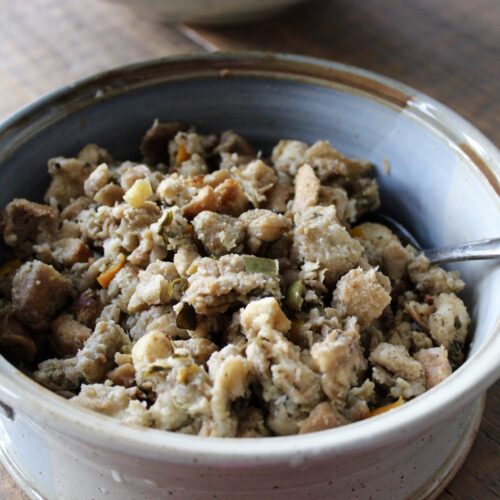 Stuffing (or dressing) for Turkey (or chicken)

other sides for turkey dinner