If you haven’t tried Pho, it’s a Vietnamese dish. It’s pronounced “fuh.” The broth is made with spices you may associate with sweet flavours like cinnamon and cloves, however it’s not sweet. But don’t worry, you can buy the broth ready made and it’s pretty good! Perfect for Beef Noodle Pho.

The first time I made this was right after New Years, after eating lots of leftover turkey and the finishing up the last of the baking and treats still hanging around from the holidays. Beef Noodle Pho is a healthy AND tasty meal. It’s also inexpensive and quick to prepare so you have no excuses! And if you’re making it in the summer it doesn’t heat up the kitchen much and most of the veggies can be local. Feel free to use whatever is in season.

I had a sirloin steak in the freezer that was raised locally, grass fed from the farm where I get my CSA share. Sirloin is a perfect cut for Beef Noodle Pho because it’s a little less expensive than the more premium cuts of steak but has good flavour, especially after marinating. And you don’t need to use a lot of meat. I used half of the steak, about half a pound and saved the other half for next time.

Marinate the steak over night or all day in soy sauce, lime juice, garlic, salt and pepper. Save the other half of the lime for garnish. Cut the beef into thin strips. If you cut across the grain the pieces will be more tender. Sear it quickly in sesame oil until brown. Sesame oil has a strong flavour so use only a teaspoon or less. 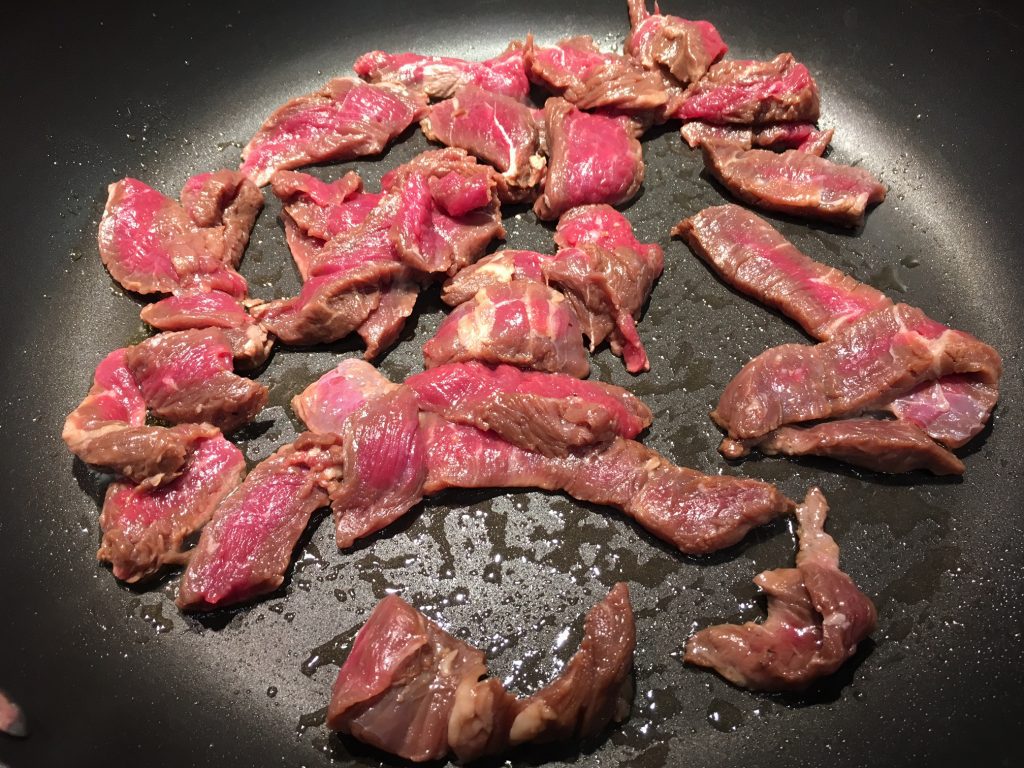 Prepare your vegetables by thinly slicing mushrooms and carrots. Cut the ends off the bok choy and slice in half lengthwise. Feel free to improvise with other vegetables. Broccoli works instead of bok choy, add onion if desired.

Add the carrots first since they need to cook longest. Stir fry for about 3 minutes, then add the mushrooms and bok choy.

While this is happening, bring a pot of water to a boil for the noodles and heat the Pho Broth in another pot. You want to cook the noodles separately or they will absorb too much of the broth.

Don’t be tempted to cook the meat and vegetable mixture too long. You want them to be tender crisp and colourful.

Break off a handful of rice noodles from the package and stir into the boiling water. Cook about 5 minutes or according to the package directions.

Assemble Beef Noodle Pho in 2 bowls by piling in the meat and veggie mixture, then adding the noodles. Pour the hot broth over top. Top with green onions and fresh pea shoots. Serve with fresh cilantro, a squeeze of lime and some Sriracha or other hot sauce if you like some heat.

If you’re like me you’ll need a fork and a spoon. Mr. H is a show off, he can handle chopsticks. Me, not so good. It doesn’t matter how you eat it, what’s important is to slurp up every last drop of the tasty broth!

You can thinly slice the beef and add marinade for a quicker version. Allow to marinate for 30-60 minutes before making Pho.
Print Recipe