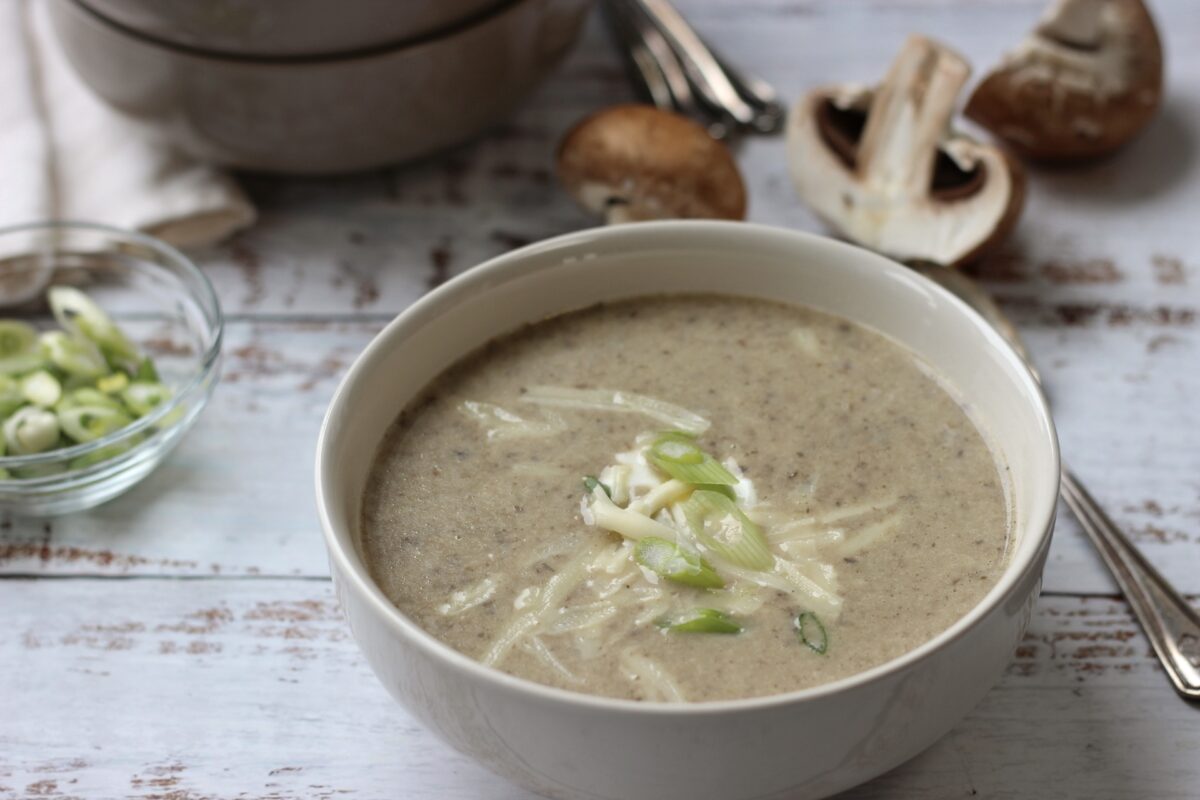 My sister and I used to take the train to Toronto when we were teenagers and we’d shop at the Eaton Centre. Then, when our money ran out we would head up to Mr. Greenjeans and have a bowl of our favourite menu item, Mushroom Cheddar Chowder. It’s been a long time since I’ve been there but I’ve never forgotten this delicious soup!

I love making soup, as you can see from the numerous soup recipes I’ve posted. This one is thick and rich and satisfying yet it doesn’t take long to make. No simmering bones for hours this time. I set out to recreate the recipe from memory and you know what? I think I nailed it! The “golf girls” were over for lunch and I served Mushroom Cheddar Chowder. Maybe it was the wine or maybe it was because we weren’t golfing, which none of us are really good at, but it received a two thumbs up from everyone! 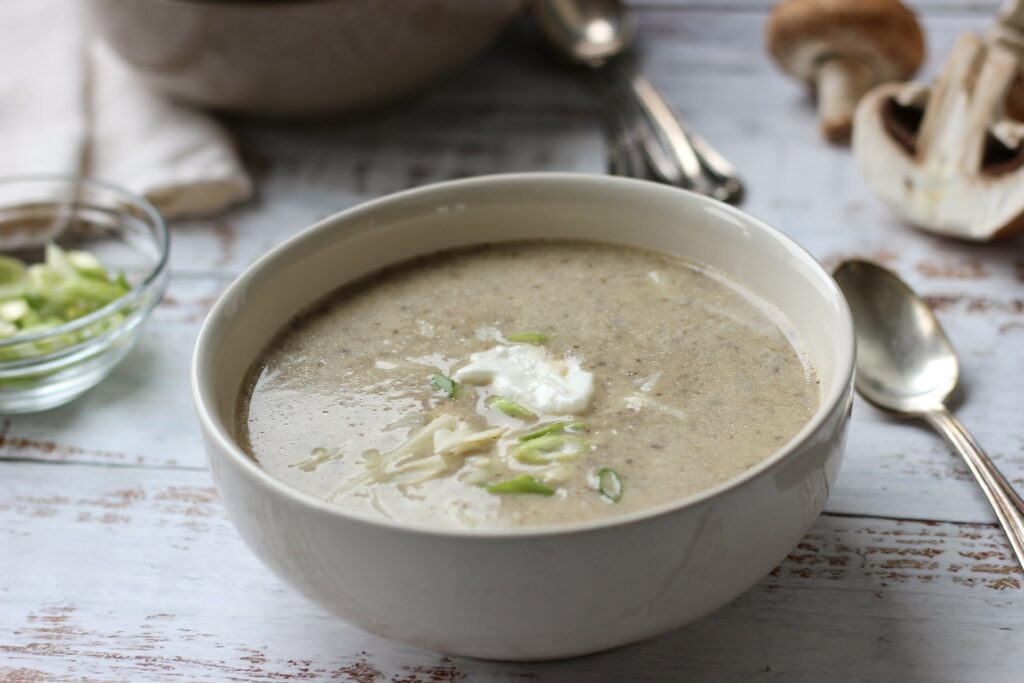 Many chowders start with bacon. There’s no bacon in this soup but if you happen to have some bacon fat, add a bit to the butter to sauté the mushrooms. It adds just a touch of flavour without overpowering the mushrooms. I actually keep a container in my fridge. After cooking bacon, just pour the clear fat into a mug, leaving behind the dark bits. It keeps for months in the fridge and adds great flavour to soups and stews.

This chowder is thickened with flour. It needs the starch to get that nice thick consistency. There’s only 2 tablespoons but if you’re looking for a gluten free option you can toss in about half a potato instead. You might think it’s not going to be thick enough but once you purée the mixture and stir in the cheese it will be perfect. 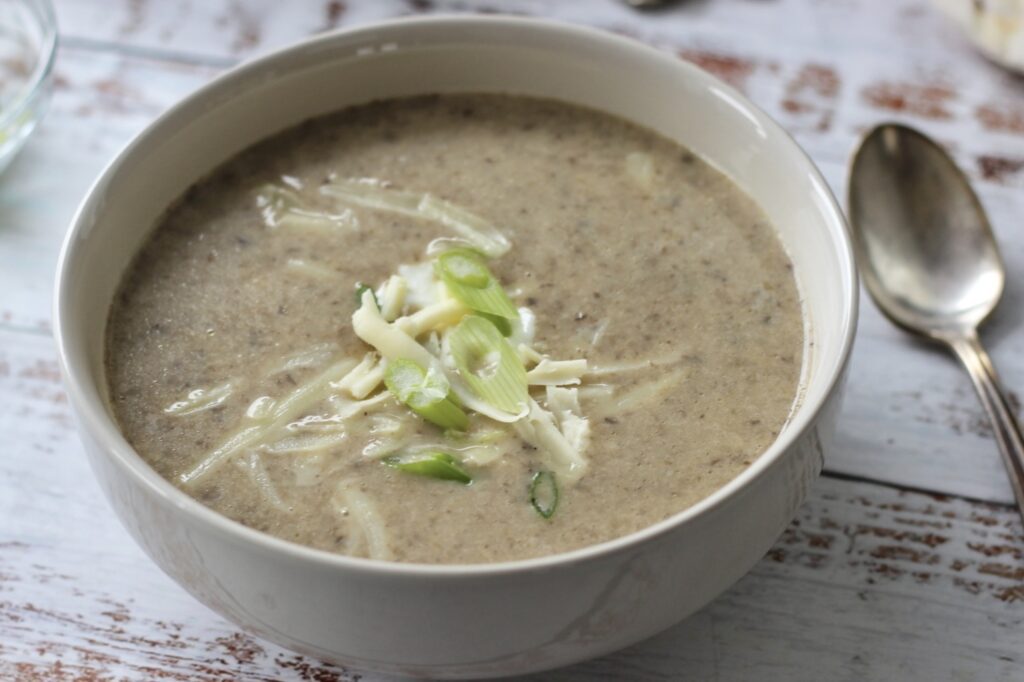 What are the best mushrooms to use for soup? 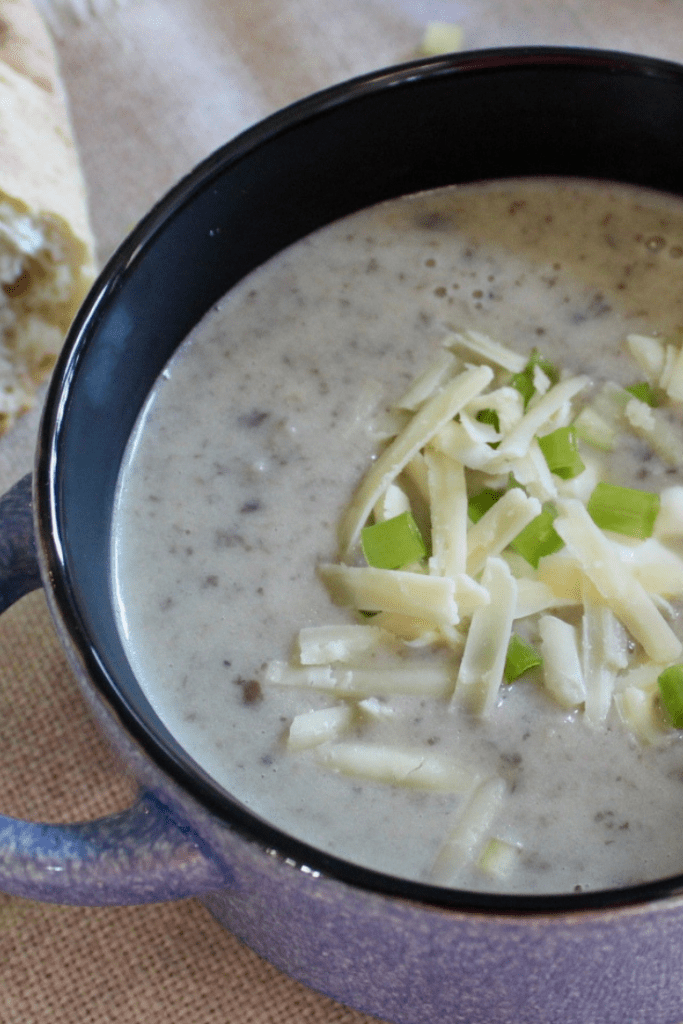 want the mushrooms to be the star of the show so I used Crimini mushrooms, sometimes referred to as baby portobello or brown mushrooms. They’re a little more mature than a white mushroom with a darker colour and more depth of flavour. Four cups sounds like a lot but they reduce quite a bit while cooking.

You can use other varieties of mushrooms if you prefer but I wouldn’t suggest going foraging in a forest. Some mushrooms are poisonous. This soup is really good (OK, it’s GREAT!) but it’s not worth dying for. 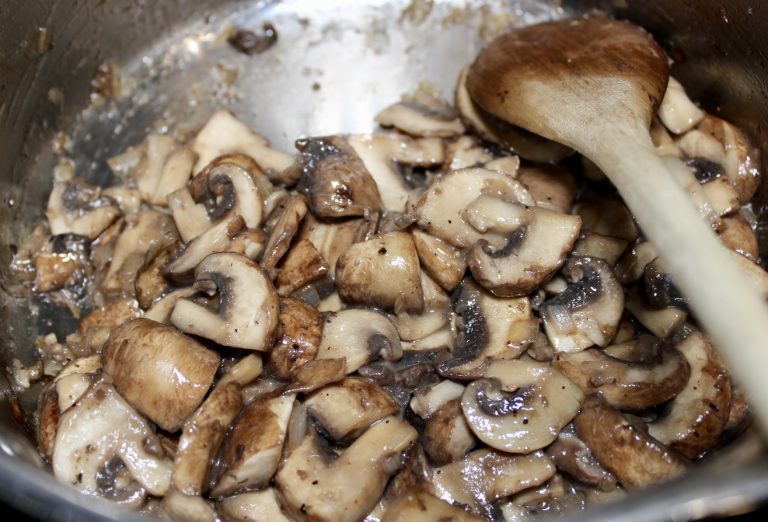 Then add butter and flour. The flour and butter create a roux which is what thickens the soup. You need equal amounts of each so adding some butter ensures you have the right ratio of fat to flour. Cook the roux for a minute or so, to make sure it doesn’t taste floury, then add chicken stock, worchestershire and a bay leaf. Let it come to a full boil then reduce to a simmer for 15-20 minutes to allow the flavours to develop fully. You can let the mixture simmer for longer if you like, just keep an eye and make sure you don’t have too much liquid evaporate.

Add the milk and let the mixture heat without boiling. Remove the bay leaf and purée with an immersion blender. If you prefer to skip this step you can chop up the mushrooms quite fine at the beginning and leave them in small chunks. I prefer it puréed.

It’s important to use a very old sharp cheese in Mushroom Cheddar Chowder. I highly recommend a well aged Cheddar for the best flavour.  And stick to a non coloured cheese otherwise it will result in an odd coloured soup. Shred the cheese and add most of it to the soup, remove from heat and stir it in until it’s melted.

Serve the soup with some minced green onions, a dollop of sour cream and the reserved shredded cheese. Add fresh ground black pepper if desired. 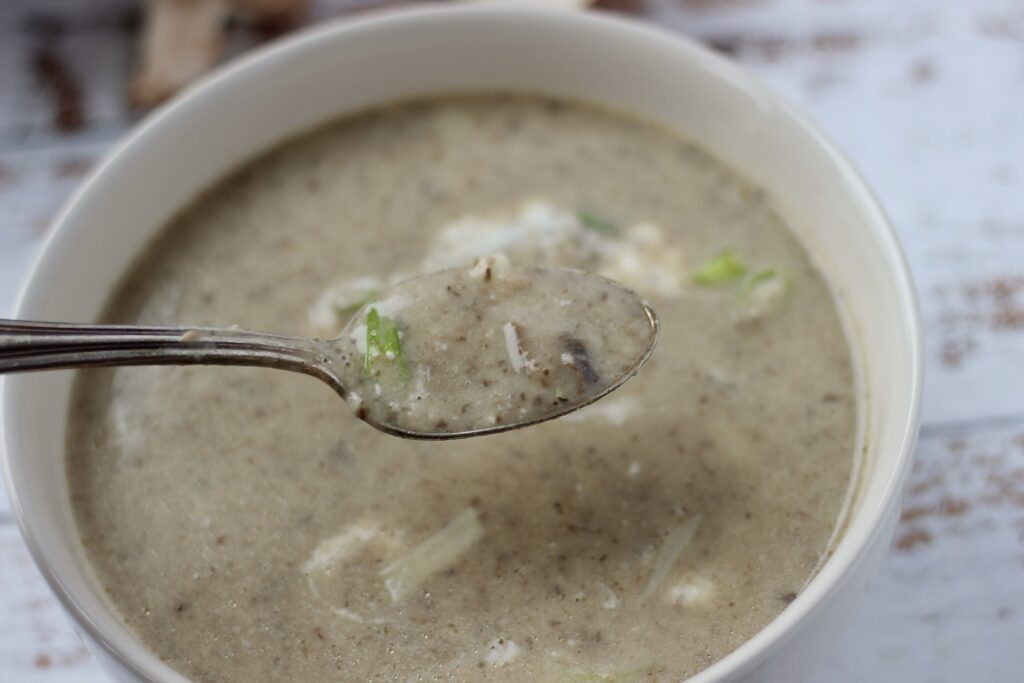 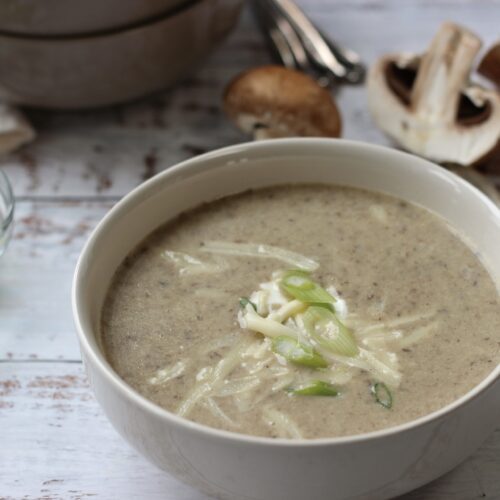 If reheating, take care not to boil the soup. Gently heat to a simmer only, otherwise the soup may curdle.
Print Recipe