Roasted Garlic and Asparagus Soup doesn’t actually contain any cream or flour. Instead, a couple potatoes give it the creamy thick texture so it’s actually gluten free, dairy free, vegetarian, vegan and maybe some other stuff too. Like healthy.

The concept of this soup came from a memory of something I had years ago in a restaurant. Cream of roasted garlic soup. It sounded strange but the flavour was unbelievable. Roasting garlic takes away the sharpness and replaces it with sweet creamy yumminess. I thought that adding asparagus would give it a better colour and by roasting the garlic the delicate taste of asparagus wouldn’t be over powered.

I wish there was a way to preserve fresh asparagus after the season ends. Besides Pickled Asparagus, the only other way is to freeze it. I know a few people who do this but I’ve never had any luck. But soup freezes well. So by making this you can enjoy local asparagus all year long!

You can roast the garlic in advance. In fact you should, unless you want a huge electricity bill. I was cooking something else the night before so I tossed it in the oven at the same time. Just trim off the top to expose most of the cloves, drizzle with olive oil and scrunch up inside foil. 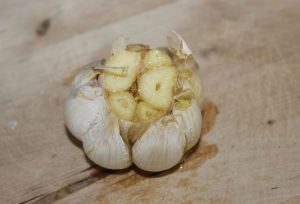 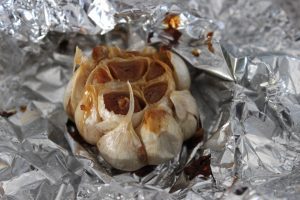 It takes about 45 minutes or so. Once it’s roasted you can squeeze the garlic right out. There’s only half a head of garlic in this soup so save the other half to spread on crackers or fresh French Baguette.

I usually base my recipes to have about 900 ml of broth which is the amount in a carton. Homemade is awesome too so if you have some, use somewhere between 3 1/2 and 4 cups. Keep in mind the amount of salt you use depends on the sodium content in the broth. So always taste as you go and taste at the end after the potatoes are cooked because they tend to absorb a lot of the salt. 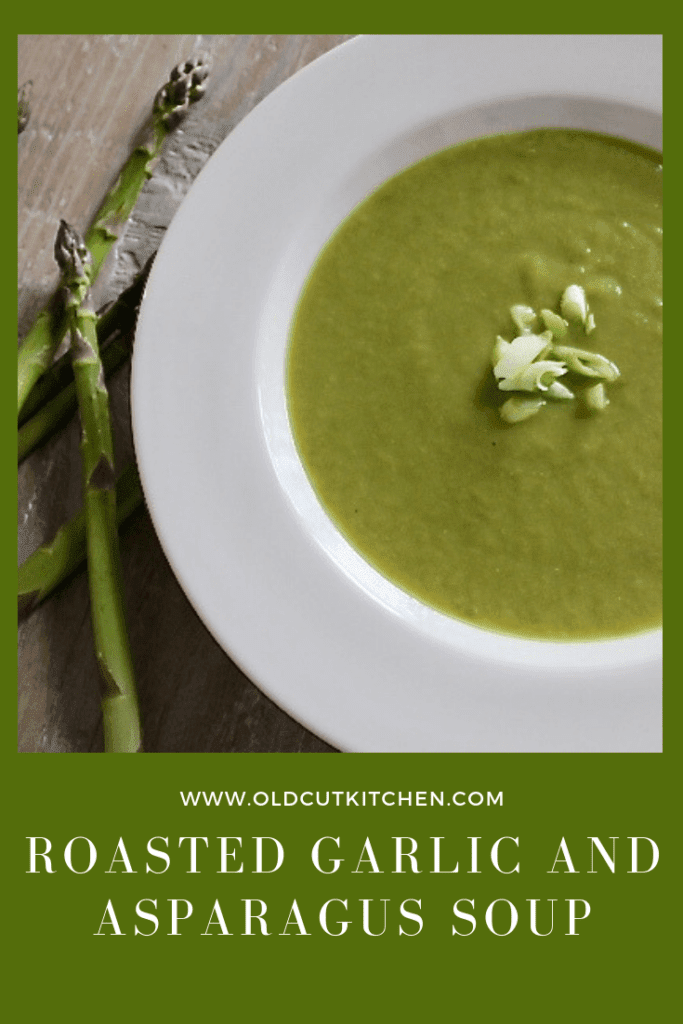 Remember to buy (or pick) about a pound of asparagus because you will lose some to trimming. The best way to prepare asparagus is to snap off the bottoms. They will break off exactly where the ends have turned “woody” which happens in time after being cut. And later in the season the ends do get a bit tough even before cutting. So for 3/4 of a pound in total, start with a full pound. 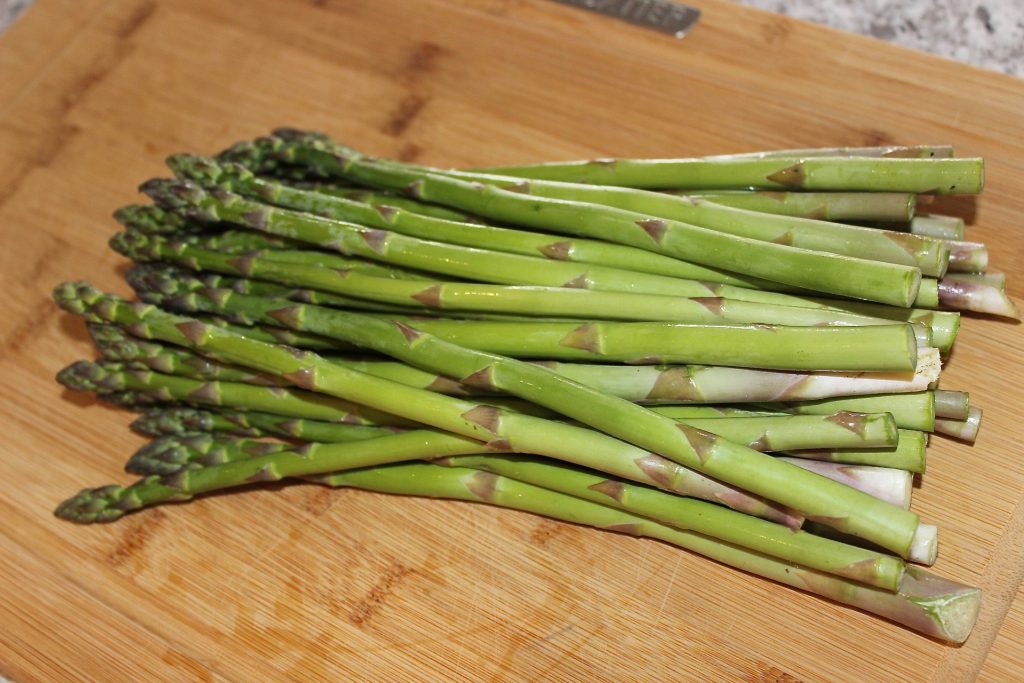 Whipping up this yummy soup doesn’t take much time at all. Give the onions a little sauté to soften. Add the garlic, pour in the broth, add potatoes, simmer, taste, season, add asparagus, simmer. That’s it! If you aren’t concerned about making a vegetarian version, feel free to use chicken broth.

When everything is fork tender, puree until smooth. An immersion blender is easiest but you can also pour the soup into a blender and purée. It’s important not to cook the asparagus too long or it will lose its colour. SECRET CHEAT ALERT: you can add a drop of green food colouring to this soup if it doesn’t have a great colour. Some vegetable broths have a reddish colour because they’re made with colourful vegetables like carrots and sweet peppers. Only one drop though. Or, I just learned from a local nutritionist that she adds a bit of spinach to her asparagus soup which would be awesome for colour and nutritional value! I use that same trick in Basil Pesto.

Stir in freshly grated Parmesan cheese. The real stuff, not the dry sawdust-like substance. For a vegan version just omit the cheese. Taste and season with more salt if necessary.

Garnish with a few green onions if you like. Chives would work too. And cracked black pepper.

If you aren’t concerned about a dairy free version, mixing some sour cream with a little milk makes a nice drizzle for garnish.

click HERE for a free downloadable collection of asparagus recipes

One thought on “Roasted Garlic and Asparagus Soup”