This recipe for Potato Bread was featured in the 2007 edition of Food and Drink Magazine. It’s made with mashed potatoes, grated raw potatoes and loads of roasted garlic. Because this rustic loaf doesn’t have any yeast, it has a denser texture similar to a scone. But don’t be fooled by its simplicity. It’s hearty and delicious.

Since there’s no yeast in this recipe you’ll have freshly baked bread in about an hour. Because there’s no waiting for the dough to rise. Potato Bread is a good recipe to make if you’re a novice bread baker. Or if you like bread. Or lots of roasted garlic. It’s a great accompaniment to Corned Beef and Cabbage,  Roasted Garlic and Asparagus Soup or Potato Leek Soup. You may be surprised at the amount of garlic in this recipe. Yes, a quarter cup. It sounds like a lot but roasting garlic changes the pungency and you end up with creamy sweet buttery mild garlic flavour. That being said, it has two full heads of garlic so you’ll know it’s in there. How to make Roasted Garlic

Roasting garlic is pretty simple. Peel off any of the loose papery skin from the heads of garlic. Try to find large heads with larger cloves for best results. Then, slice off the top to expose all or most of the garlic cloves without taking off too much. Drizzle some good olive oil over top and scrunch them up inside tin foil. Bake in the oven for about 30-40 minutes. They’re ready when the cloves are soft and golden but not too brown.

When they’re cool enough to handle, hold the head of garlic at the bottom and squeeze the cloves right out of the sections. Slice open any sections that weren’t exposed to get every bit of garlic out of there. If you have any extra, roasted garlic is wonderful spread on a cracker or added to mashed potatoes.

How to make Potato Bread

Start by grating the raw potatoes. To get 3 cups you’ll want to use 2 fairly large russet potatoes. You want a starchy baking potato for this bread. If you peel most of the potato and leave one end with some peel, it’s easier to hold them while grating. Otherwise they’re slippery. And, since 2 potatoes will give you a little more than you need, you don’t have to worry about grating right down to the end. This little tip helps avoid grating your knuckles, which I’ve done many times. Add some salt to the grated potatoes after measuring to help draw out some moisture. Leave them to drain for 30 minutes in a strainer. They may start to get a little pinkish brown in colour but that’s ok. After half an hour squeeze the mixture to get any extra moisture that hasn’t drained.

Boil and mash the other potatoes without adding any milk or butter. A medium sized potato will generally give you about a half cup of mashed so it’s a good idea to cook 4, just to make sure you have enough. For the mashed potatoes in this recipe you can use more russets or any other type of potato. Add the roasted garlic and some salt and pepper to combine.

Use a large bowl to mix up the potatoes with the flour, baking powder, milk and melted butter. Add some dried rosemary which goes really well with the other flavours. The dough is pretty shaggy and hard to mix but once it starts coming together, dump it onto a floured surface and knead by hand until it holds together. Knead about 5 minutes. It’s not a smooth dough like yeast bread. You can also use a stand mixer with a dough hook to make the Potato Bread.

Divide the dough into 4 equal sized pieces and roll each one into a circle about 6 inches across. Try for a shape that’s not quite a ball but not a flat disk. Somewhere in between. Arrange them on a baking sheet with butter or parchment paper. Brush the loaves with beaten egg. 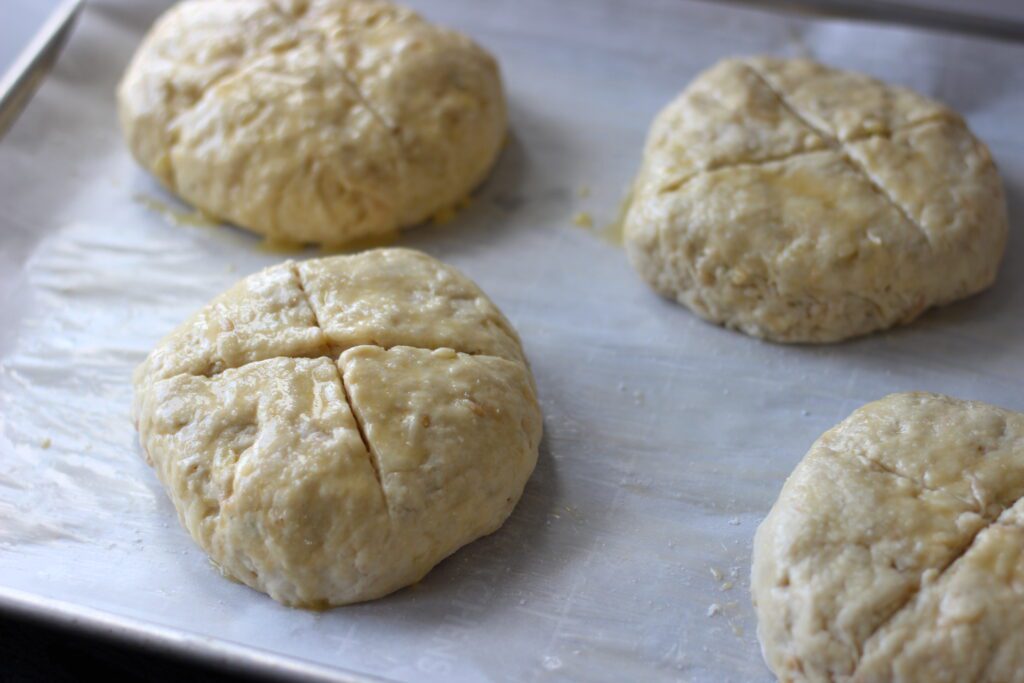 Using a sharp knife, cut a cross in the top of each loaf. Sprinkle some course salt over top. Bake them on the middle rack for 40 minutes until they’re lightly browned. Remove them from the hot pan and let the loaves cool on a rack before slicing. One thought on “Potato Bread”