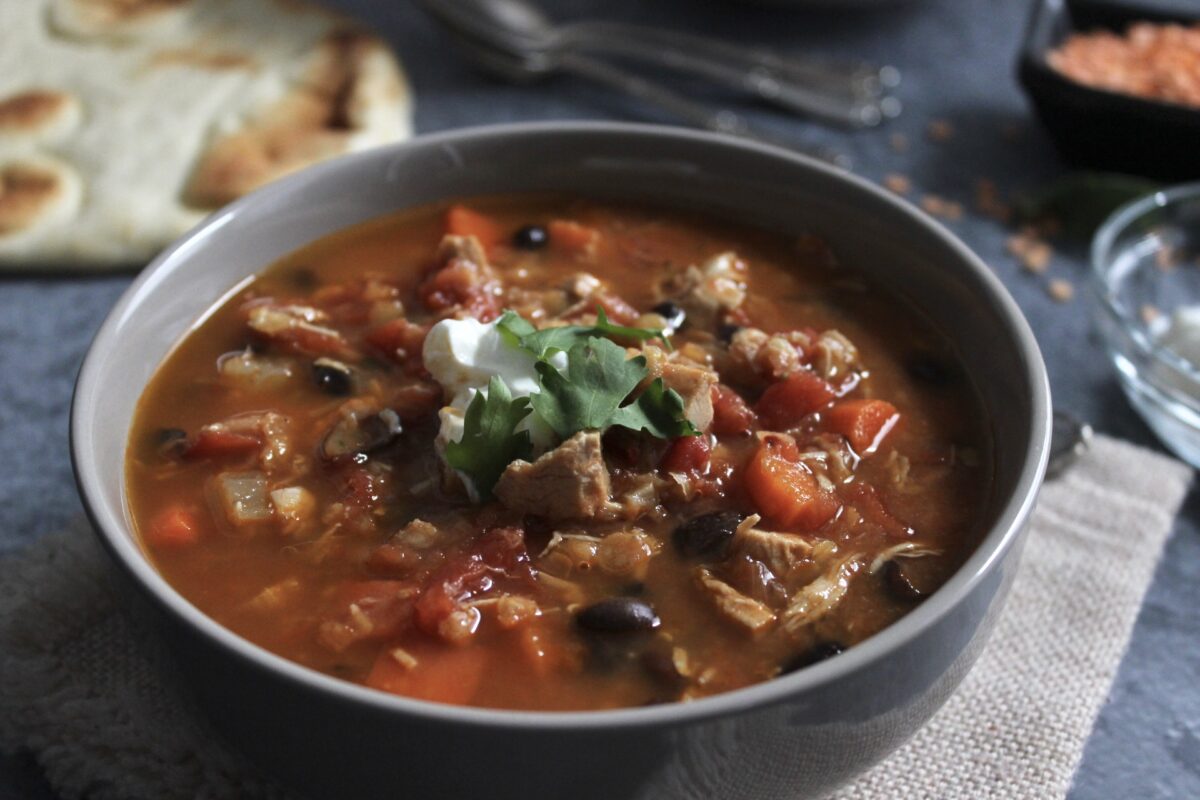 This soup is so thick it should really be called a stew. It’s also a powerhouse of healthy ingredients and big flavours. And as if that’s not good enough, Tomato Lentil Soup with Chicken is also easy to make and light on the budget.

If you’re new to lentils here’s a quick summary. They’re cheap. They’re loaded with nutrients. And, they can be stored for ages. I was sure that most lentils were grown in India but guess what? Fun fact – the majority are actually grown right here in Canada. Followed by India. Lentils are from the legume family and come in different colours, either whole or split with hulls removed or not. Tomato Lentil Soup with Chicken is made with split red lentils which cook so quickly they’re ready in mere minutes. 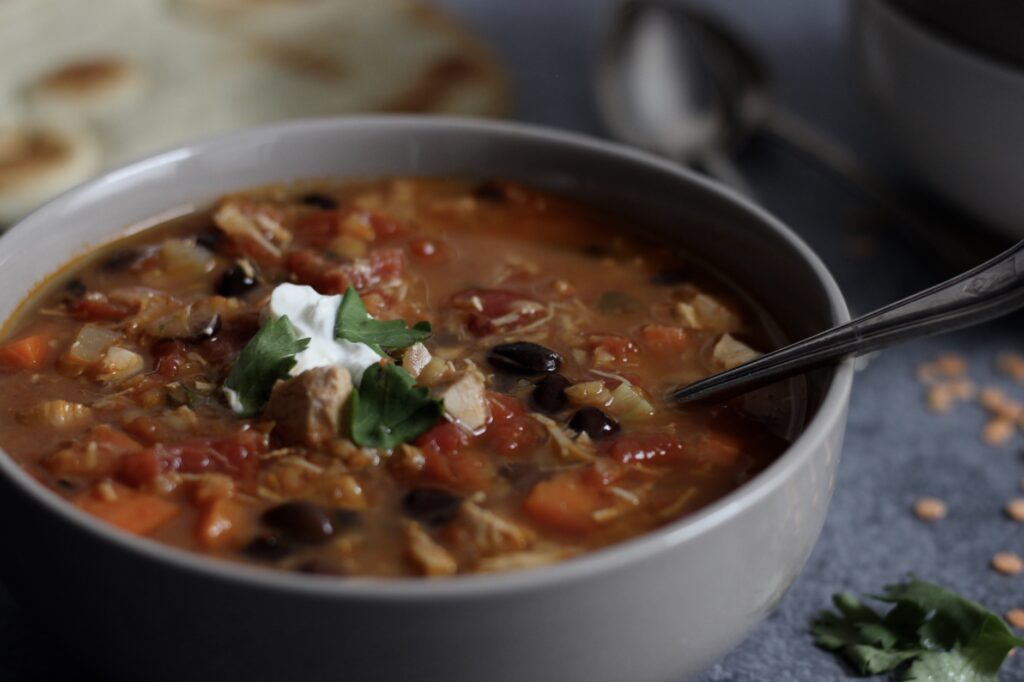 If you’re looking for a vegetarian or vegan lentil soup recipe, this one can easily be converted. Just start with olive oil instead of bacon fat and use vegetable broth. And of course leave out the chicken. There’s already a ton of protein from the lentils and black beans anyway. 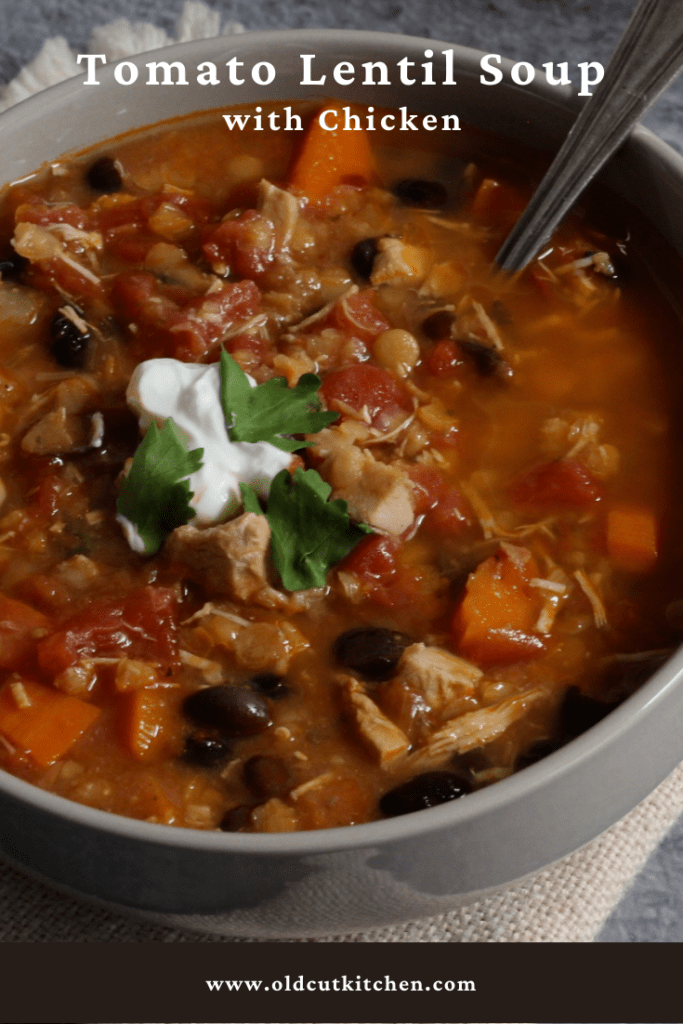 Have you ever made soup and thought it just didn’t taste right? Like it tasted like all the ingredients in their raw form but didn’t have that slow simmered flavour? A handy trick is to start with a mirepoix which is the basis is most soups and stews. Onion, celery and carrot. In most cases I use a ratio of 1:2:3 which seems to be just right. You can substitute leeks for onions which are slightly milder with a hint of garlic. Slowly softening them on low heat brings out a depth of flavour and even a sweetness that’s a game changer. I keep bacon fat in the fridge just for this purpose. Any time you cook bacon, pour the fat into a heat safe mug and store in the fridge. Add the garlic last so it doesn’t burn and soften that too.

After adding most of the rest of the soup ingredients, let it simmer slowly for about half an hour to ensure the tomatoes don’t taste raw. Tomatoes benefit from a hint of sweetness to counteract the sour flavour you may taste. That’s why softening the mirepoix is important. And, for this recipe for Tomato Lentil Soup with Chicken, I’ve added chipotle chilies in adobo sauce. The sweet, spicy smoky flavour is so good in this soup. There’s only a small amount so it won’t overpower the flavour. Use the rest of the  little can to make Chipotle Beef Short Ribs. The chipotle peppers add a small amount of heat. If you prefer you can substitute a little smoked paprika instead.  Taste and season with salt, keeping in mind that the sodium content in broths and canned goods vary widely. 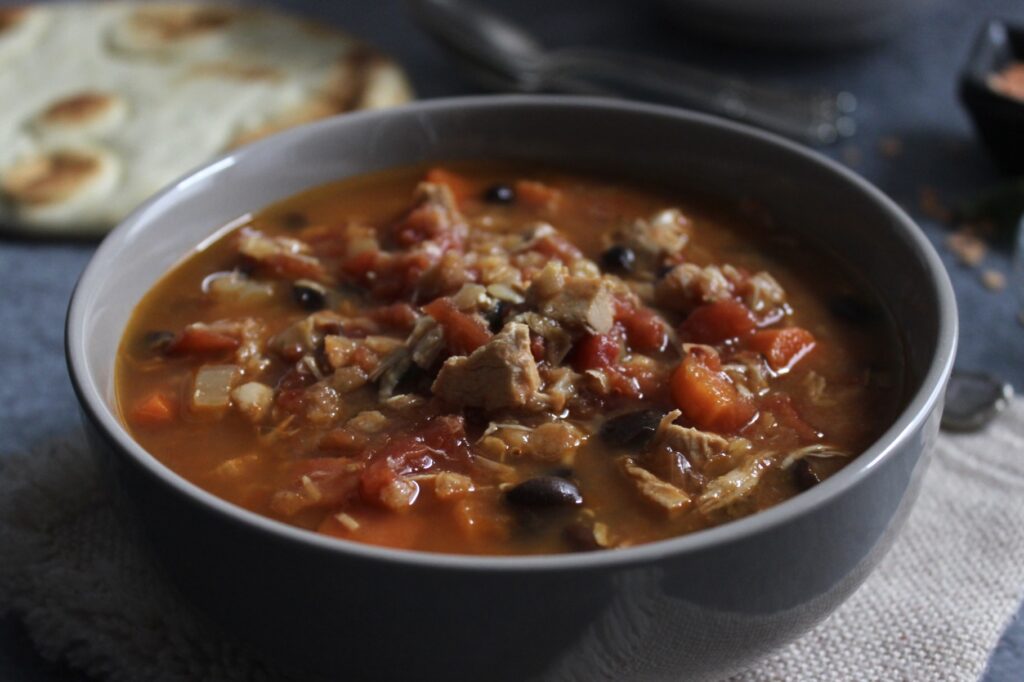 If you add the chicken too soon it will break up too much so wait until the end and add it along with the split red lentils. The lentils will soften in about ten minutes which is just enough time to ensure the chicken is heated through without turning into mush. You may have to add a bit of water if the lentils thicken the soup too much.

Right before serving stir in a squeeze of lemon juice, along with either cilantro or parsley. Chopped herbs add a fresh and colourful element.

I like to offer a variety of garnishes when I serve most soups. The best garnishes for Tomato Lentil Soup with Chicken are green onions, cracked black pepper and maybe a dollop of yogurt. And of course more fresh cilantro, unless you’re one of those people who taste soap. I’ve tried to convert those people in my household but I’m told it’s impossible. But I keep trying. 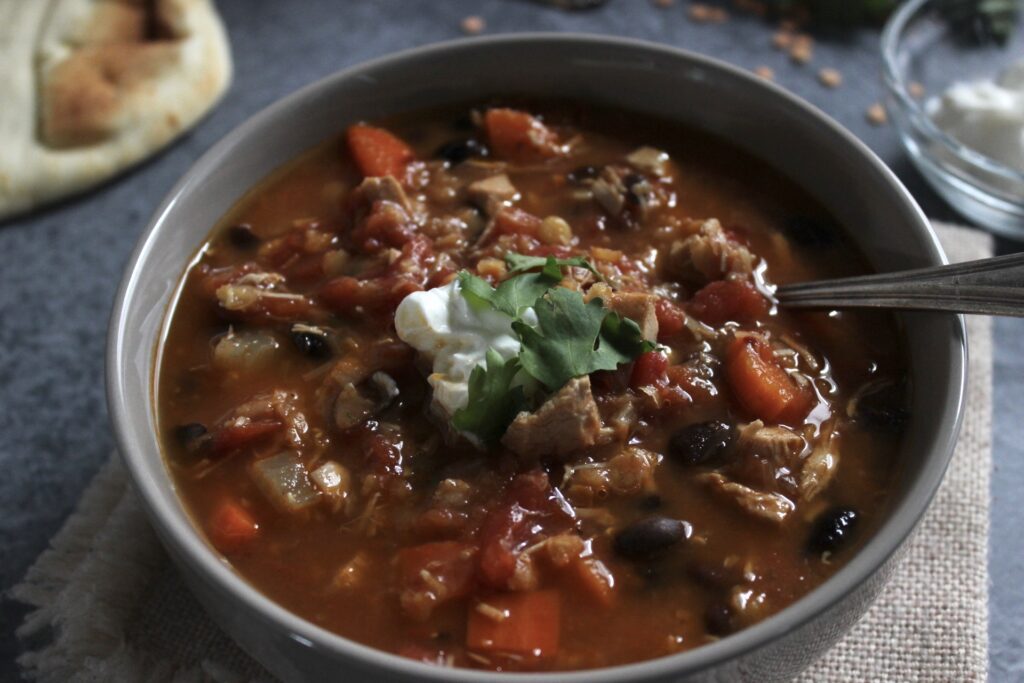 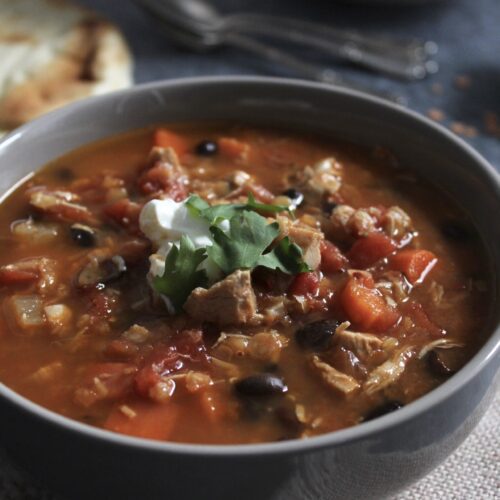 Chipotle peppers in adobo sauce have a sweet, smoky spicy flavour. The small amount in this recipe will add a mild amount of heat. If serving to those who do not wish to have any heat, you could substitute a pinch of smoked paprika.
Print Recipe