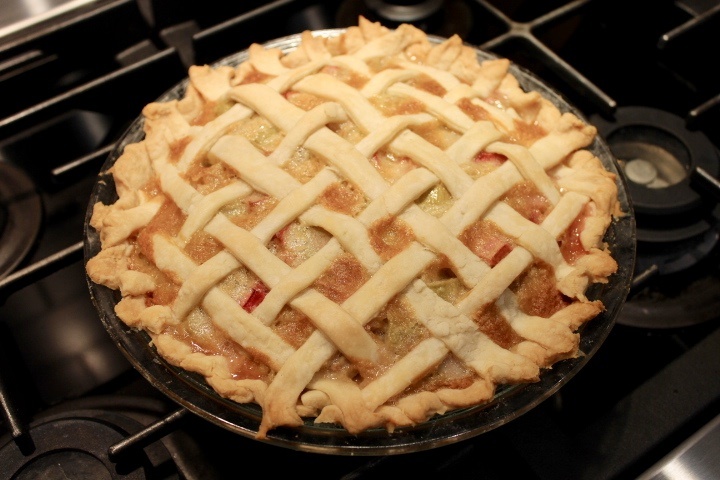 My grandmother used to say if company stopped in she could have a pie in the oven before the kettle boiled to make coffee. That isn’t going to happen in my house but it really doesn’t take long to make pastry. And it freezes well. Certain fruits like rhubarb can be chopped and frozen in perfect pie measurements so you can whip up a fruit pie like a pro. You can use store bought pastry if you like but if you’ve never made your own, you should give it a try.

There’s a few tips and tricks that help you get great results. Even the best pastry makers have flops sometimes. This King Arthur Flour link is an excellent resource with lots of information about different types of flour and fat and how it affects the final product. My mother made pastry with lard, thinking that’s what her mom used. Turns out my grandmother used shortening. She had always referred to it as “fat” when teaching the next generations about pastry making so my mom assumed she meant lard. So in the spirit of tradition, I sometimes use lard, sometimes shortening. But my favourite pastry recipe is a combination of half “fat” and half butter.

Here’s the secret to making Perfect Pie Pastry. The less you touch it the better. You want to keep it cool to prevent the fat from melting before it hits the oven so hands off. And use cold fat right from the fridge. You only need a little water but it has to be very cold so drop in an ice cube to make sure it’s cold enough before adding it to the dough. Too much water equals shrinkage. And finally, wrap the pastry tightly in plastic wrap and refrigerate for at least 30 minutes before rolling it out. This lets the glutens relax to prevent tough pastry.

How to make perfect pie pastry

So how do you make a pastry without touching it? The food processor of course! Even the pros do this. So let’s make some pastry!

Measure your butter and lard or shortening. The boxes have lines to show different measurements when cutting in flat slices. This is very helpful. But did you know you can also measure it by immersing a chunk into very cold water? It’s basically displacement so for instance, if you want 1/3 cup of butter, fill a glass measuring cup to 1 cup of very cold water, then add the butter and push it down until it’s under the water. Use a fork or something that will hold the butter but not add too much volume to mess up the measurement. Then look to see where the water line goes up to. If you have 1/3 cup of butter, the line will go up to 1 1/3 cup. Easy right? This works with other fat based products like peanut butter.

When you pull the butter out of the water, give it a little shake and the drops will run right off. It’s ok to have a few drops left behind since there’s water in the pastry dough anyway. Cut it into chunks – remember, as little touching as possible – and drop them into the food processor. Repeat with the lard or shortening.

Add all the flour and salt and pulse in short bursts. Watch for the flour to become coarse while still seeing small fat chunks, ideally the size of peas or a little larger. Then slowly add water a spoonful at a time and pulse after each time. Once the pastry is sticking together (but its ok if there’s still some not blended), dump it out onto plastic wrap, seal and refrigerate.

Once the dough is chilled, flour a large clean surface, unwrap the dough and roll it out with a floured rolling pin. You should be able to see the small lumps of fat. If it’s been in the fridge for a while you may have to wait five minutes or so for the pastry to warm up enough to roll out. 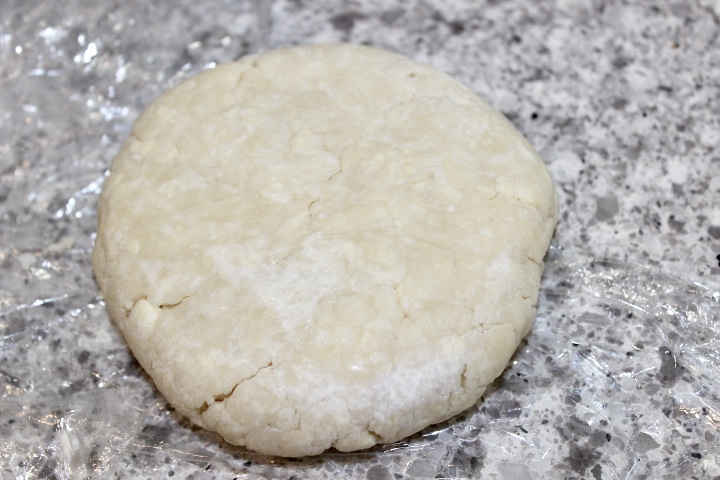 Make sure you flip the dough a few times and turn it a quarter turn after rolling up and down from the middle. Keep it well floured to prevent it from sticking. Try to keep it from having thick and thin spots, especially at the edges where it can get too thin. Don’t expect it to be perfectly shaped. 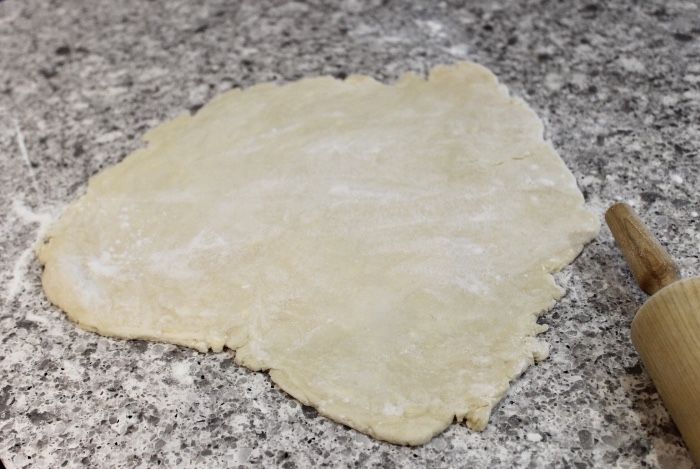 When it’s slightly larger than the width of the pie plate, use the rolling pin to fold the dough over and transfer to the pie plate. 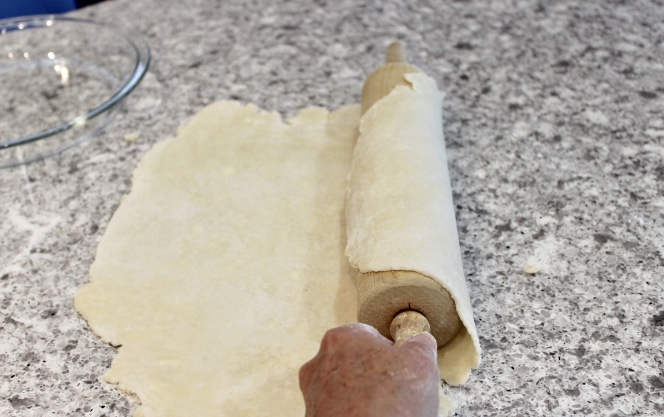 Adjust it so that the dough hangs over and is sunk into the pie plate. 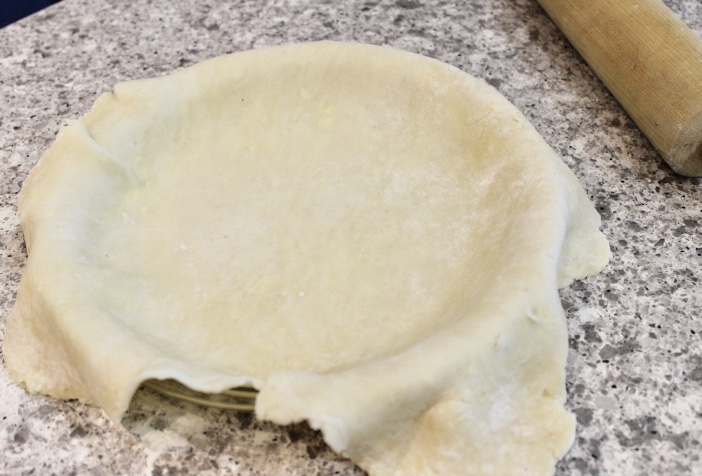 If you have to patch a spot, cut a piece off where you have extra overhang, brush water on the edge and press together. It might hold together. Or not. If you’re doing a single crust, use a sharp knife to trim the edge.

Crimp, fork, pinch, whatever method you like to give the edge a nice finish. 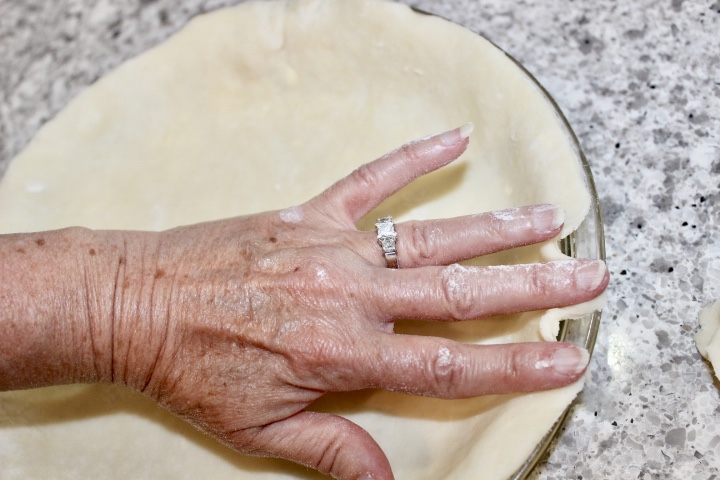 Otherwise, if you’re doing a top crust, wait until both pieces are in place to trim. Before adding a top crust, brush the edge with cold water or egg whites and gently press to stick together. Then trim.

This is the pastry used for Rhubarb Custard Pie.

Some recipes call for eggs or egg yolks and sometimes vinegar or lemon juice. In my family that’s called cheating. But lots of people swear by it. This recipe uses a combination of shortening and butter mixed with all purpose flour, a bit of salt and cold water. That’s it. 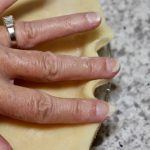 use this recipe to make: