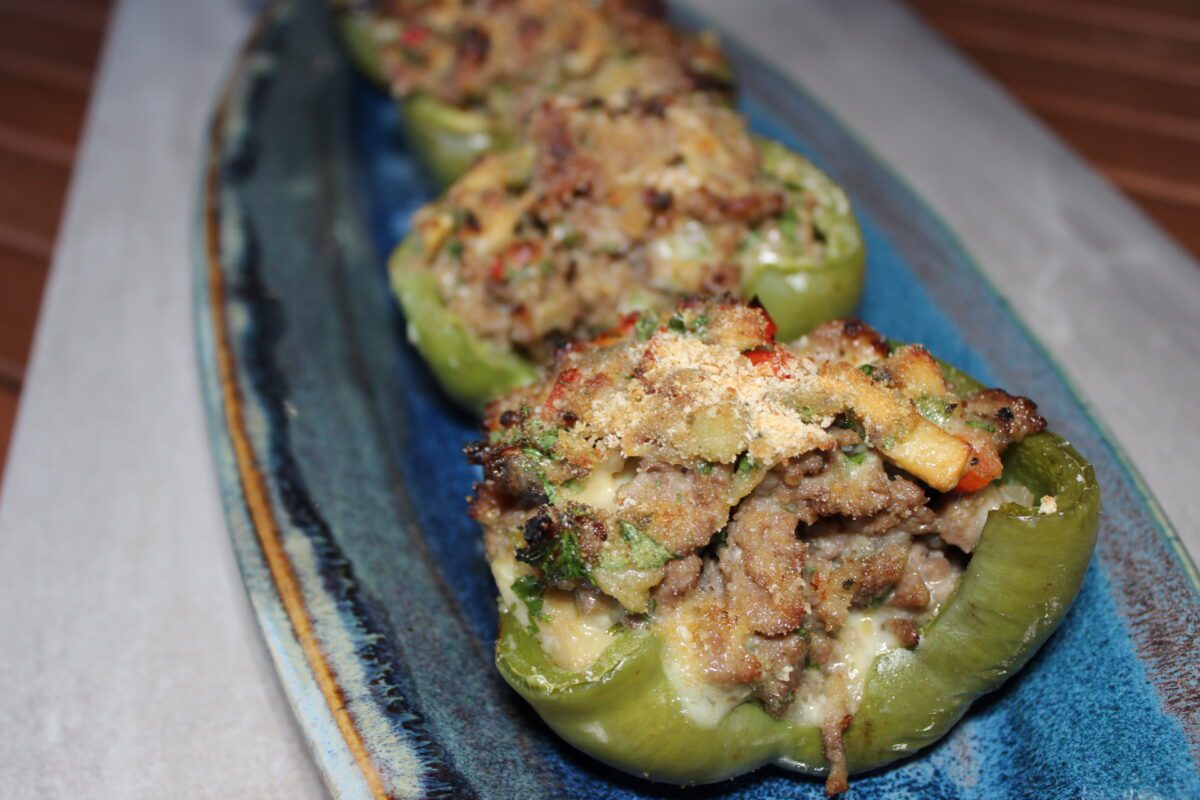 You can make a complete meal from a few seasonal veggies and some store bought sausage meat. And if you’re looking for an easy mid week dinner recipe, with some prep in advance, Sausage Stuffed Peppers can be whipped up in no time at all.

When peppers are in season, these Sausage Stuffed Peppers are a great way to enjoy them, along with some other late summer produce. Choose green or red peppers. It doesn’t matter. But for the best presentation, use some sweet red pepper in the stuffing mixture if you’re stuffing green peppers or the opposite if you’re using red. Just to add some colour.

I prefer cutting the peppers in half instead of stuffing full peppers. Personally it’s a better ratio of veggies to meat for me. Just cut them in half, scoop out the seeds and veins and lay them in a baking dish. This recipe makes enough stuffing for 2 large or 3 medium sized peppers. 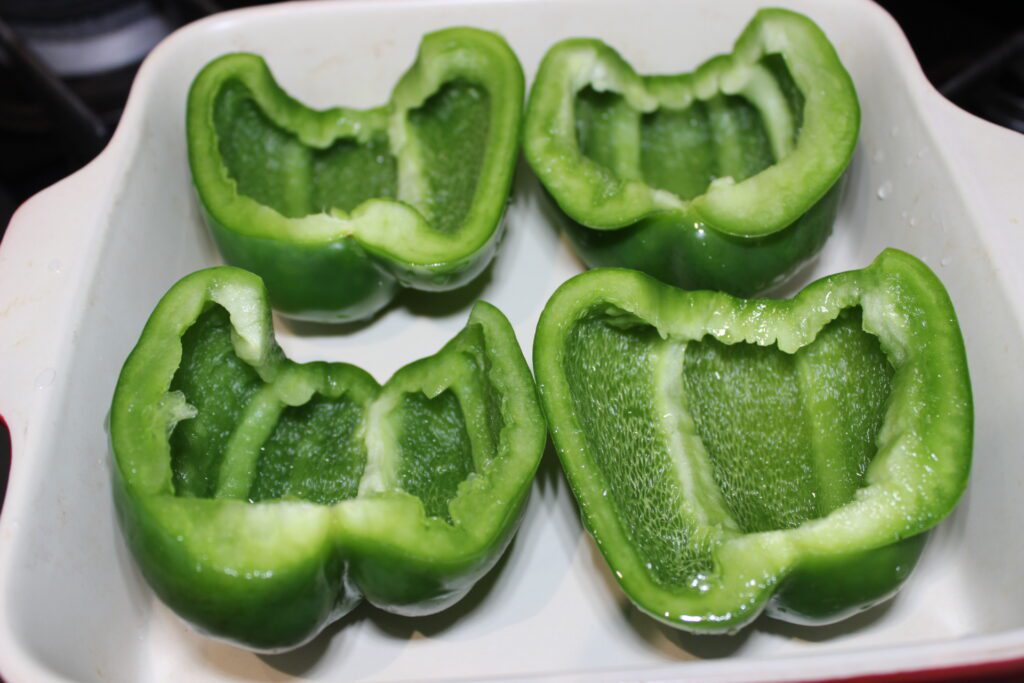 Eggplant and summer squash or zucchini don’t have a lot of flavour but they’re excellent sponges. So adding some to the stuffing mixture not only adds volume and nutritional value, but also soaks up the flavours from the sausage and seasoning. Sauté some onion and garlic, mushrooms and peppers in olive oil along with your chopped eggplant or summer squash. You can add some hot peppers too if you like. 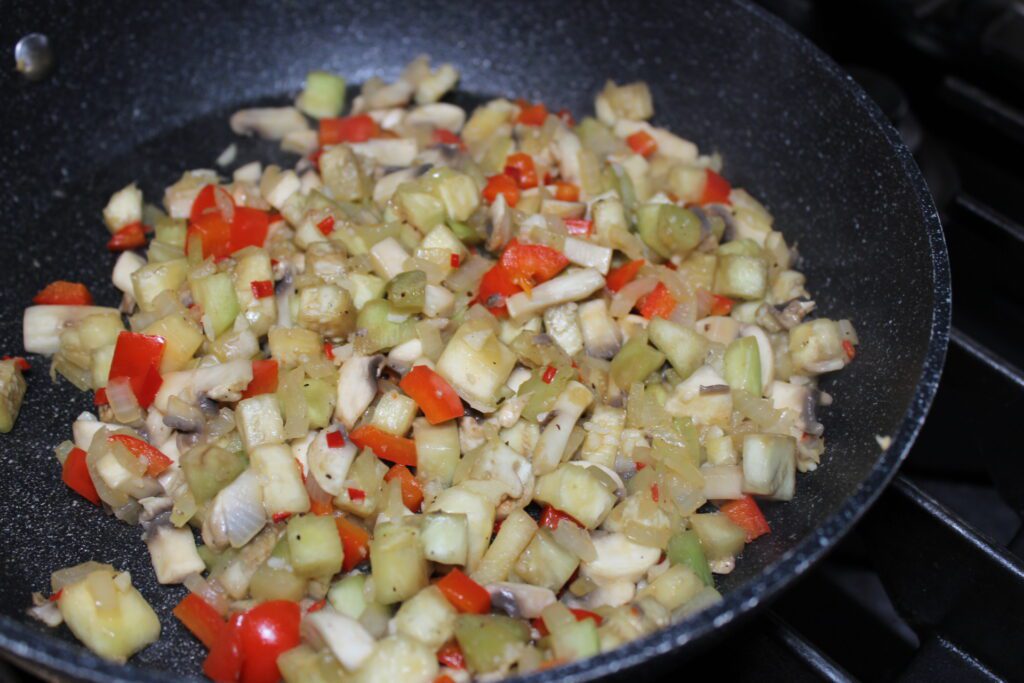 Using sausage meat is great for this easy Sausage Stuffed Peppers recipe because it saves time and ingredients. All the seasonings are already in the meat so you just have to add a few things and they’re ready to bake. If you can’t find sausage meat, just buy sausages and squeeze the meat from the casings right into the pan. For spicy people like me, use hot sausages or add hot peppers to the stuffing mixture. Otherwise use mild Italian sausage meat. Italian seasoned sausage meat works perfectly in this mixture with the right amount and kind of seasoning. You won’t need much salt and pepper since the sausages are already seasoned. Taste before stuffing and decide if you want some or not. 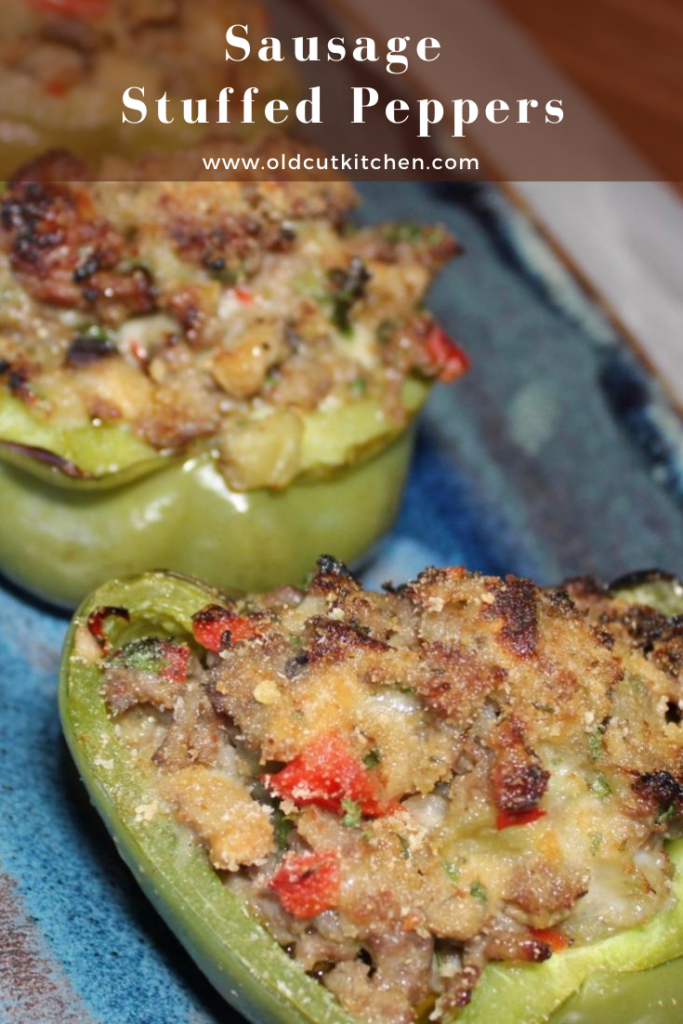 Once the veggies are partially cooked, spread them to the edge of the pan and add your sausage meat to the middle. Brown the meat, breaking the chunks up as it cooks. Once it’s mostly cooked, stir everything together. 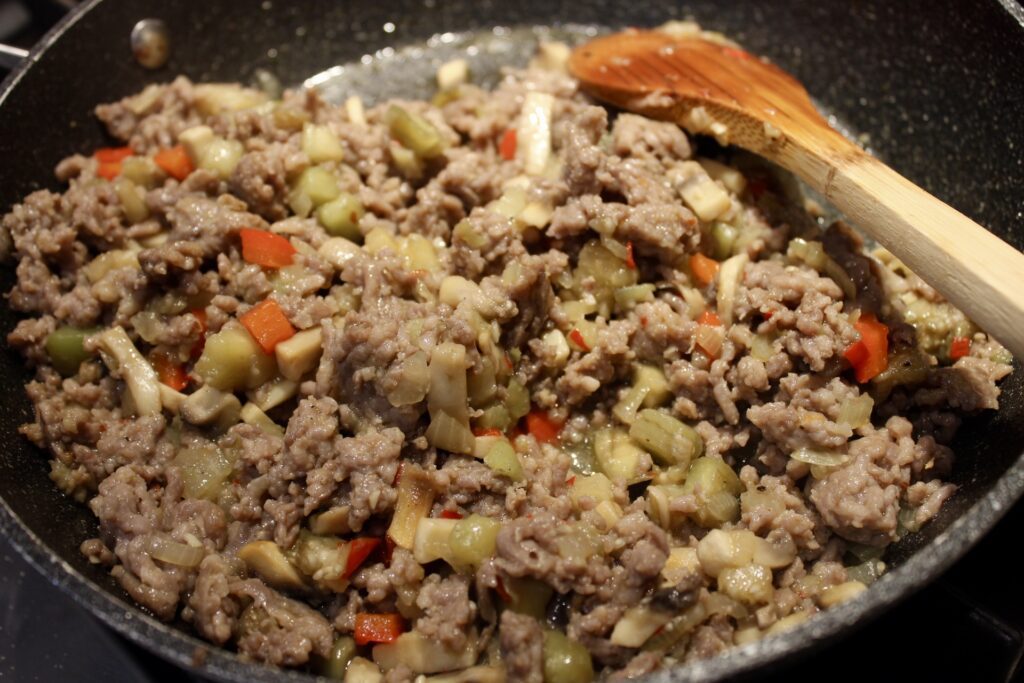 Stir in some shredded cheese and fresh chopped parsley then pile in as much stuffing as you can. 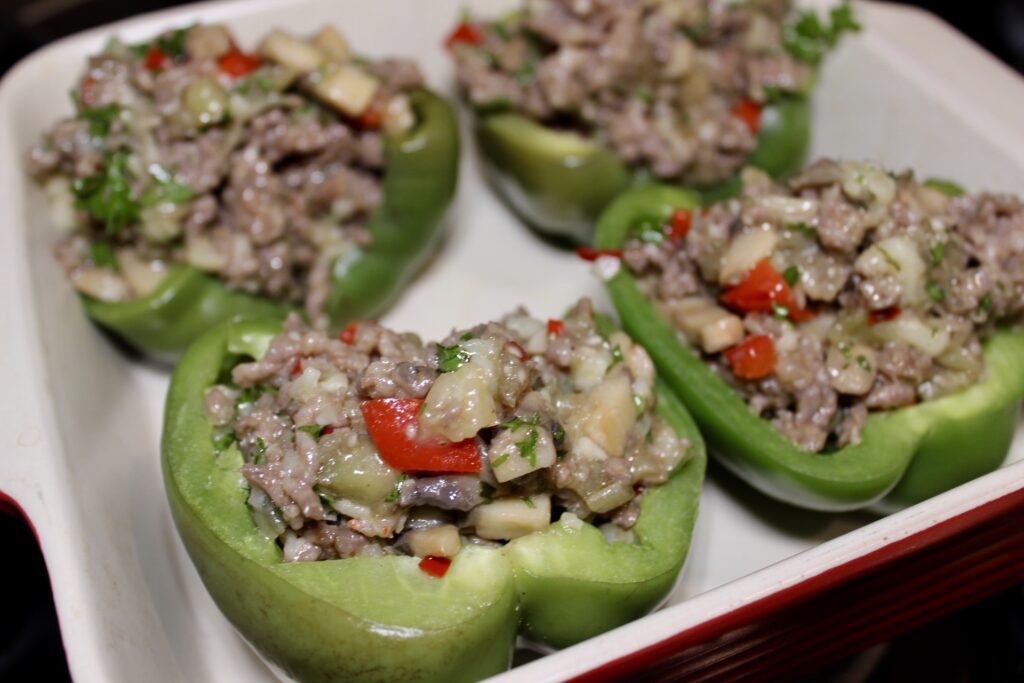 Sprinkle some breadcrumbs on top and bake, covered first, then uncovered so they brown on top. Use convection setting if you have it or switch to roast to maximize the browning on top. For a gluten free version, skip the breadcrumbs. You could add Parmesan cheese instead.

The cheese in the filling makes it ooey gooey and creamy. 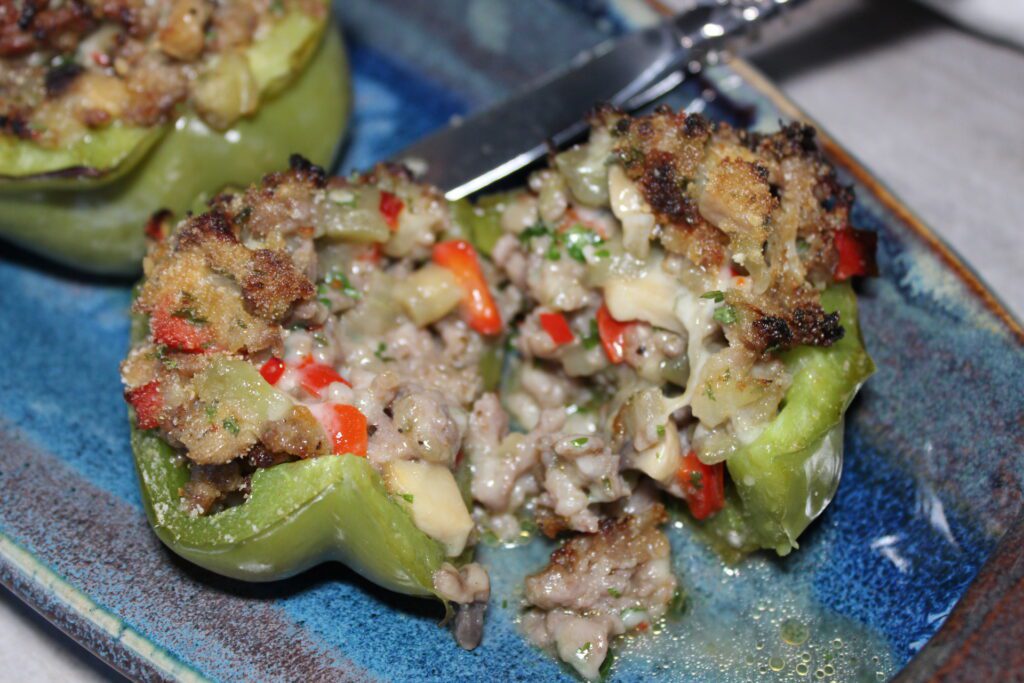 For an even speedier mid week meal, pre bake the peppers and make the filling in advance. Then, when you’re ready to cook, add the shredded cheese and fresh parsley to the filling, fill your peppers and bake them. You’ll have dinner on the table in 30 minutes or less! 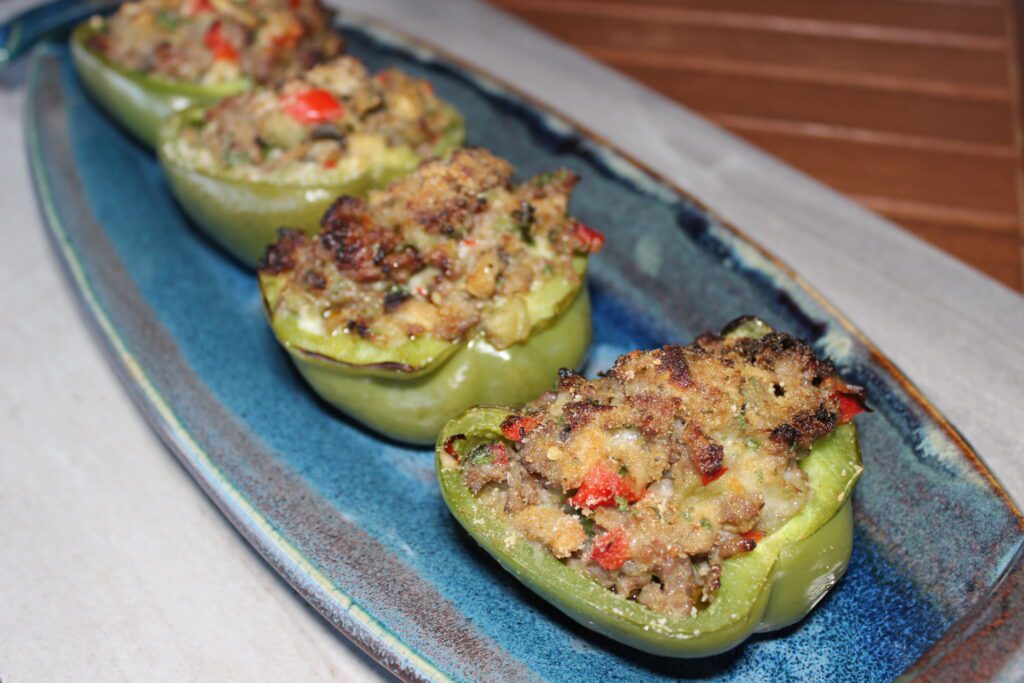 You can enjoy Sausage Stuffed Peppers on their own as a complete meal or serve along with some Rosemary Roasted Potatoes. 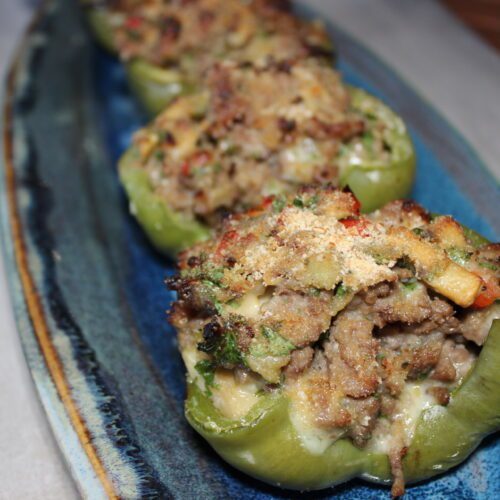 Baked Pasta with Sausage and Peppers